Feather Safety Razor Company of Osaka, Japan has been producing the sharpest razor blades for generations, since 1932. These blades are used in shaving razors and even surgical instruments. You know that what is good for a surgeon must be good for your morning shaving routine! With its manufacturing headquartered in the “City of Cutlery” of Japan, Seki City, the legend of sharpness and quality grows even more.

Throughout the world, Feather’s blades are considered the sharpest. Most men familiar with the brand recognize them by their trademark yellow and black packaging. As manufacturing has evolved, this packaging has remained very much the same throughout these years.

But its history is what really makes legend of Feather blades so, well, legendary. According to Yasuoki Takeeuchi in his book History and Culture of Shaving in Japan, Feather blades are steeped in World War drama.

Supposedly, after the first World War ended in 1918, Gillette T-Shape safety razors were the big market monopolizer in Japan. Then two former German POWs who decided to remain in Japan after the war started making their own version of safety razors. These became very popular and started the Feather brand as Japan Safety Razor Company. The name was later changed to Feather.

When the China incident occurred in 1937, Japan headed into World War II after the war in the Pacific. As of 1940, the government of Japan banned razor import and production of open razors. Safety razors were still allowed, however. So Feather was able to take over the market without a struggle and basically held a monopoly at 80 percent of market domination.

In the brand’s history there is a gap from 1932 to the late 1950’s. This is because ownership changed from the German POWs to that of Japanese citizens. This is where the brand’s myths and mystery are really born.

Reliability Beyond the History of Feather Razor Blades 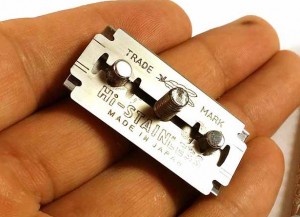 Today, Feather razor blades are known for being the highest quality and sharpest stainless steel blades on the market. Maybe this is due to the brand’s extremely high standards in quality control for consistency in manufacturing. Maybe the sharpness can be attributed to the manufacturer’s detailed assurance of the highest quality materials in its products.

Aside from the debate of truth or myth in stories of Feather’s brand history, the fact remains that these blades are as sharp as any Japanese shogun warrior would expect. You will love their sharpness and quality for your wet shave, too.