Double Edge Razors are a very popular razor for wet shaving and have been for a very long time. Even though straight razors provide a closer shave, the safety feature of double edged razors have made it way more popular than the straight razor.  It might have something to do with people not wanting to worry about slicing their neck every time they shave. Cartridge razors may not shave as close as the other two, but they do have their advantages, such as their ease of use and the ability to shave faster without worrying if you will cut yourself.  Apart from that, safety razors offer a cleaner, closer shave and are cheaper to maintain than cartridge type razors.  There are different double edge razor designs that may be confusing at first for beginners so this article will attempt to explain these differences and offer insight into the world of the double edged razors so you could make an informed purchasing decision. 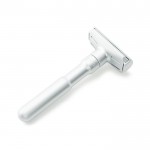 There are three basic designs of double edge razors and they are named accordingly. The first is the one-piece design, which is also called butterfly, adjustable or silo razor. This razor has a mechanism inside it that allows the cutting head to open with a twist of the handle or the press of a knob. One-piece razors gained popularity because razor blades could be changed easily without disassembling and reassembling the razor.   The down-side to these razors are that they are difficult to clean and because they have moving parts, they are more prone to malfunction after being used for many years.  The Merkur Futur Safety Razor is an exception to this rule since this high quality German razor is built like a tank and is guaranteed to last for many years. 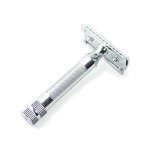 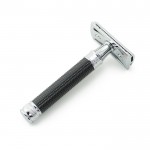 The three piece double edged razor is similar to the two-piece razor except that the handle can be unscrewed from the base of the head. This makes the bar attached to the top head short as opposed to the long bar of a two-piece razor. The earliest models of the three-piece razor were offered by Gillette around the early part of the twentieth century and they have since grown to become the most popular type of the double edge razor. Their popularity is partly because of the ease of cleaning and also their design which leaves very little moving parts.  This made the Gillette’s some of the most durable type of double edged razors available until other brands were released from countries all over the world. 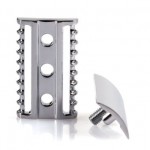 There is another major design difference between razors when it comes to their safety bars.  Most razors have a solid safety bar and are called closed comb safety razors. They are the most widely used and are perfect for beginners. The solid safety bar provides an even, tight pressure on the skin and provides protection against nicks. Open comb razors on the other hand have periodic openings along the bar which gives them the look of a comb. They are more suited to people with coarse hair and are considered to be more aggressive razors.  We recommend starting with closed comb heads if you are new to wet shaving.

A razor’s aggressiveness is a result of the amount of space between the edge of the blade and the safety bar. The more space there is, the closer the razor can shave and the more aggressive the razor is then said to be. There are basically three levels of classification for razor aggressiveness and they are called mild double edge razor, medium aggressive razor and the aggressive double edged safety razor. These three types of razors are non-adjustable but there is also an adjustable razor whose aggressiveness can be varied.

The last major difference in safety razor design is also the design of the safety bar. The majority of safety razors have a straight bar design, meaning that their safety bars are in a straight 90 degree angle to the handle. The slant bar design was patented in 1915 and has its bar slanting at an angle different than the 90 degrees to the handle. This makes the razor’s blade able to slice a stubble at a slant which is a more effective method. This feature has been used in the design of the guillotine for example and is appreciated mostly by men with coarse beards and even more appreciated if your skin is sensitive.

Knowing the differences in double edge razor design will enable you to choose the best safety razor according to your skin type, your hair type and your shaving style. Only a straight razor can offer you the closest shave when you compare it to the double edged safety razor but it lacks the safety of the DE razor which is why we do not recommend it for beginners.  If you have any questions on the types of double edges razors, please don’t hesitate to contact us.  We will be more than happy to help.